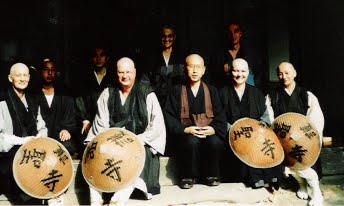 I spent some time in that last couple of days doing
ritual begging at the Renaissance Festival here in Mn.
I made my morning rounds for about an hour and a half
before the festival opened. I felt this was an
important practice that somehow didn't make it across
the Pacific Ocean. I had heard all the "problems" with
bringing this practice to the west..westerners were
different, begging is viewed differently..we do not
want to seem like Hare Krishna's ...begging has a
different meaning here we do not want to seem to be
bag ladies.. ...and on and on a list of excuses for
taking a pass on this unimportant practice ...zen is
all about zazen after all. My histories tell me the
reason that we put work into the monastery (and hence
seshin schedule) was that the Chinese did not respond
as well to begging as the Indian people did so the
monks had to work to grow their own food. It is
interesting to me that these are the same excuses the
Japanese Priests used for not making some begging
rounds. Some of the monasteries still send out their
monks to beg in the streets on a monthly or weekly
schedule , and I had found it an important practice to
me when I was in Japan...more in harmony with my
spirit then sitting still endless hours ..and
wondered if it could not be done here in the west as
well. This has been a practice since the first days of
Buddhism, and I wondered what was different today that
made it impossible here. So I thought I would just
give it a chance and see what happened.

I picked the festival because it is a place where
artists and craftsmen gather. It is a place where
something a bit different would have a chance to be
encountered for what it was...I thought I might get
some chances to teach something to some folks and that
did indeed happen. What I did not expect was what I
would learn by putting out this encounter with the
wider world.

I got basically the same response we got in Japan
right down to the same average contributions per hour.
I got the same reactions from the cringing because
they seemed to expect a bolt of lightning from the
sky, to extreme gratitude for someone taking the time
to bless their business. I got one very negative
reaction which was less then the number we got in
Japan. I found the ratios of reactions to be virtually
identical..not at all what I expected to find...about
as many folks knew what was happening as those folks
in Japan did. I was walking along thinking the
divisions between east and west did not seem so big
and thinking about how down deep we are more alike
then we think when I noticed something else.

I noticed that though I made the same offering of a
blessing, the same chant at each booth..the reactions
fell along a bell shaped curve...some were really
happy..some were really unhappy to be caught in this
little unexpected drama, most fell in the middle. Some
were generous, some were timid ..some were
cheap...some came boldly forward and some hid behind a
curtain and peeked out. In each case my offering was
the same..what was different was what their reaction
to it was...I came to realize that those reactions
were just a moment of how they react to the world...I
was offering this experience ...if they were blessed
it was because they had already been blessed...If they
were uptight...it was because they were that
already..what I was really offering was an interaction
that either confirmed their generous and open nature,
or strongly pointed out their grasping and cold
approach to the world...the blessing were already
theirs, or would not come from me..they needed to open
up to accept blessings or let the good things pass
them by. I was offering them the chance..and whether
it was received or not had nothing to do with me.

After the many remarks about how grateful the
merchants were for the blessings of their shops....I
began to realize something else..this performance of
service and connection to the larger community has
been cut out of most of the practices that have made
the crossings..the offering of services, begging
rituals, festival rites, social activities and
services in times of disaster.. all have been left out
of many centers in the west ( I would say most but
that is an opinion and not a fact I know) It did not
seem to matter much to these folks if they called
themselves Christian, Druid, Pagen, Buddhist or
Muslim. The most frequent response was that they could
use all the blessings they could get,and gratitude
that someone took the time to come to them and offer
them something that they did not even know they
lacked. I had to tell folks that no I could not come
back to them tomorrow because the practice was not to
discriminate, that each booth was to be visited in
turn...none passed and none doubly blessed..It did not
matter if I liked or disliked the shop owner..whether
I had heard the stories of their depravities or their
good works..I must visit each one in their turn, and
then go on to the next one..I had to promise that I
would not quit..and make another round when I could
get finished with visiting every shop...I still have
about a third of the booths to visit next weekend
before I can start around again.

I cannot not count the number of people who bowed to
me on my busy morning rounds, each bow I returned with
a warm feeling in my heart. My lower back is sore
tonight...I have not bowed so much to so many in a
long time.

There is a buzz in the community..something
happened..something different..that got everyone to
thinking about blessings, and faith, and what is
important to them...one person asked me about practice
opportunities and I directed him to a center in his
neighborhood..one person discovered a connection to my
wife because they had a mutual friend who practiced
for a while at my teacher's temple. People had
questions..they now had someone they knew to ask. I
answered questions on such various topics as where to
buy a hat like that..to how to make my sandals....to
deep and penetrating questions about the differences
between Buddhism and Christianity.

I earned enough in an hour and a half each day to have
purchased my food for the day , and to secure a modest
place to sleep for the night...about the same amount
in relative terms as the monk's in Buddha's sangha did
2500 years ago in a land very far away (and maybe not
coincidently about the same amount we earned with the
practice in Japan). I will give this money to my
teacher in gratitude for teaching me about this
practice..he will use it to help build the temple that
will be our offering to the world.

I do not know exactly what will be the effects of what
happened ...but I do know something happened...and
something profound started to flow around, to, and
from one old fat monk stepping out in funny straw
sandals and a big round hat.

I did not ask anyone to become a Buddhist or if they
were a Buddhist..I did not ask any one to sit. I did
not ask anything from anyone..I just put out a wish
that the Compassion of Kannon Bodhisattva be upon this
place and those who come here..over and over
again...and held a bowl for people to put something in
if they wished. ...and before someone tells me this is
not a Soto practice...I will have to tell them that
this is indeed a practice still performed at Eiheiji
and Sojiji..the head temples of Soto Zen Buddhism..the
temples founded by Dogen Zenji and Keizan
Zenji..considered the two founders of Soto Zen in
Japan (I know not many westerners have heard of much
of Keizan Zenji..his writings are not as sale able as
Dogen's) This is a practice at the two head temples
that each Soto Shu Priest must visit to be "abbot for
the day" as part of the Dharma transmission
ceremonies. For one day each Dharma Transmitted Soto
Priest must preside over these temples that have this
practice as a part of the schedule. This is a practice
that has been part of Buddhism since its first days,
and was practiced by Dogen from his first days in a
temple.

Maybe cowering in our Zendos pretending it is a good
thing not to take the practice of Buddhism out into
the world is really what Dogen and Keizan had in
mind....but then there is this little nagging
thing....why did they put on their sandals, pick up a
bell, hike up their robes and head out to bless the
homes and businesses of the people of the towns at the
bottoms of the mountain paths?

Fudo
Posted by Michael Koppang at 9:10 AM